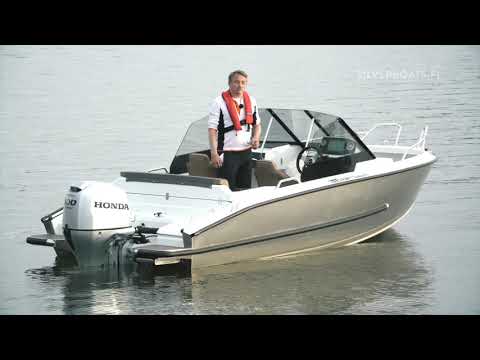 The all-time Silver favourite, the Silver Hawk BR, was fully renewed in 2019. The renewal of the Silver Hawk was by no means only a cosmetic update, but is new all the way down to the aluminum hull. In addition to the new aluminum hull, it also has new steering consoles and windshield as well as an all-new interior. This versatile bow rider is suited for both leisurely rides along the shorelines, as for transportational needs or even recreational fishing.


n 2019 Silver launched an all-new Silver Hawk BR. The renewal of the Silver Hawk was by no means only a small cosmetic update as the boat model includes an all-new aluminum hull, new steering consoles and windshield as well as an all-new interior. The new Hawk BR quickly became a favourite amongst summer cottage owners in the Nordics, and is claiming its well-deserved place with honor.

Silver Hawk has been an important part of the Silver model range since the very beginning, and it quickly became one of the favourite boat models of the Silver range - of all boats sold from 1991 up to this day approximately half have been different versions of the Hawk hull. During the years Hawk has naturally gone through several smaller updates concerning both gunwale color and console solutions, but now the Silver Hawk is fully renewed from the hull up. The new design is a cooperation between Finnish design agency Navia Design and the Silver product development team.

The hull design takes inspiration especially from the Eagle BR and Fox BR/Avant models, which were launched in 2016 resp. 2018. Appearance-wise the hull is sleek and sporty, and it moves smoothly on the water cutting gently through the waves. As with the rest of the Silver Y-models, the hull construction of the new Hawk BR utilises the unique Silver AluFibre™ structure, where torsional stiffness is achieved in the aluminum hull itself. The hull sides are formed by closed-off triangular boxlike aluminum elements that are densely filled with a closed cell water non-absorbing polyurethane foam, and in the hull we use aluminum crossbeams and transverse reinforcements to achieve torsional stiffness. The interior of fiberglass, which stands for the aesthetics and practicality, is in itself basically seamless so the hull-borne noises have literally no room to develop. Thanks to this unique construction method the new Hawk, as all other Silver Y models, are practically unsinkable, utterly safe and surprisingly quiet to use. The boat is extremely seaworthy, nimble and easy to manoeuvre, and as with all Silvers the driving properties are top notch.

On the face of it the Hawk has changed quite visibly. In addition to the hull profile, the biggest visible changes are surely the renewed windshield design and the design of the stern bench. The windshield follows the same design principles as that of the new Silver Fox BR, and is in other words lacking windshield railings in such. The front windows are made out of glass, and the side windows out of acrylic - this way we can even offer a windshield wiper for the driver (accessory). The new windshield gives good shelter from wind and seasprays, and the two-part door in-between the consoles improves the wind shelter also for the passengers travelling in the back. The consoles are of a new design, which makes them larger and more ergonomic, and in them there are plenty of storage compartments for small personal belongings. On the instrument panel a 9-inch Raymarine Axiom+ (as of YM2021) chartplotter is installed already at the factory.

The stern bench’s construction and design mimics that of the Silver Fox in that it is possible to open fully including the armrests and backrest. Inside the bench there is a spacious three-part storage unit, which will encompass both a large bag and additional belongings. Inside the stern bench there is also a designated space for the stern canopy for when it is not being used. The interior layout ensures that both driver, co-driver and passengers have plenty of leg room, and in the aft corners we have incorporated two boxes for mooring lines and anchor. In the bow you have two large storage units, one on either side of the middle walkway, which double as additional seats. The bow mooring lines you can conveniently store in the rope box that is open from the side, leaving wind to freely circulate in the rope box. Safety during embarking is ensured by steady railings in the bow.

The new Hawk BR, which is mainly sold together with a 100 hp outboard engine, has a large 115 liter fuel tank.

The main selling points of the Hawk BR are its sleek and sporty design, combined with the safe, unsinkable construction and outstanding driving properties. The storage capacity is also extensive, so all personal belongings, equipment and bags easily find their own places in the boat. In comparison to many competitive boats in the same size range, the level of standard equipment is quite comprehensive. The standard boat includes e.g. a 9-inch Raymarine Axiom+ chartplotter + CPT-S sensor, a NMEA network, a two-part door between the two consoles, a storage space for the stern canopy and stainless steel cleats. On the list of additional accessories one can find among others an Abloy lock set for the storage compartments, an audio player with Bluetooth, a sunbed for the bow, a targa fishing arch, trimtabs and a waterskiing pole.

Hawk BR is especially suited as a boat for leisure rides in the archipelago together with family and friends and as an access boat, but due to its versatility it is also a great companion for waterskiing and even recreational fishing.

In our community section
More about this: Saxdor 200 Sport
Display map