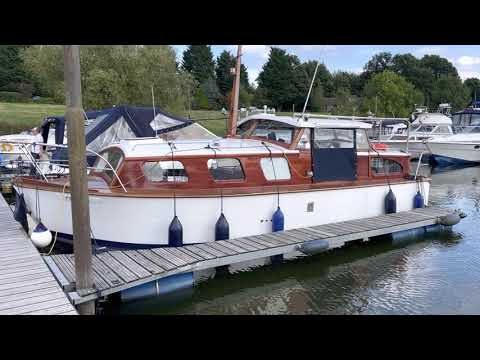 “Felicita”. A Classic Gentleman’s Thames Cruiser with connections to ‘HMS Titanic” and the “Little Ships of Dunkirk”. This boat has been the subject of a 5 year restoration which has included back to bare wood preparation and finishing, rewiring ,re plumbing , engine service and overhaul, together with many sympathetic modern improvements that enable stays aboard both convenient and pleasant. She comes with a current BSS safety certificate and independent structural presale survey confirming she is in good condition for a boat of her age and provenance. Viewing by appointment only.


History
Felicita" (meaning happiness in Italian) Originally named 'Peppers Pride", her name was changed to Felicita in 1966. Built by Richmond Slipways Ltd in 1960...and registered number 302511 a 27ft Gentleman's Thames Cruiser Motor ship with single screw.Richmond Slipways was founded by Charles Herbert Lightoller RNR. DSC (1874 - 1952). The Commander's life and career was crammed with adventure. He had gone to sea at 13, survived four ship- wrecks, was marooned on a desert island, mined gold in the Klondike, rammed and sunk a German U-boat with his destroyer in the First World War.In 1940 Commander Lightoller took his motor yacht "Sundowner" to Dunkirk and rescued 127 Soldiers from the Normandy beaches. Sundowner is preserved at the Maritime Museum in Ramsgate. Commander Lightoller was the senior surviving officer of the Titanic in 1912. Going down with the ship he took charge of an upturned lifeboat and was the last survivor to be rescued.He represented the White Star line at the London and New York enquiries into the disaster. In 1947 ,in partnership with an old friend and his surviving son ,Commander Lightoller moved to East Twickenham and set up a boatyard at 1 Ducks Walk, opposite the site of the old Tudor palace. ‘Richmond Slipways’ as it was called, built seven boats.Six of these were purchased by London Police to patrol the Thames.Only one was sold privately to a retired naval officer ,George Alfred Pepper and aptly named “Peppers Pride”.She was renamed ‘Felicita’ in October 1967 . The Commander passed away peacefully in his boatyard just before Christmas 1952. His memory has been immortalised recently in the Warner Brothers 2017 film “Dunkirk”.Commander Lightoller was portrayed as Mr.Dawson played by actor Mark Rylance.
Specification
Specification Built 1960 by Richmond Slipways Ltd 27ft (8.57M) Carvel built Wooden Motor Yacht, Constructed of Teak on an Oak frame. Teak inlaid decks. Beam; 9ft 5/10 (2.87M) 4 Berth (2 Single berths in Aft Cabin,1 Double Berth in Galley from converted dining table) Wheelhouse seating the Captain and three passengers complete with sliding sun roof. Single Screw and fitted with BMC Commander 2.2 Litre Diesel engine ,together with a Borg Warner. Gearbox and reduction drive. Maximum Design Speed 6 Knots Twin Diesel Fuel Tanks Webasto Top C Diesel night heater with electric air blowers Immersion heater fitted Jabsco Electric Toilet. Heads converted to toilet and shower room with modern fitments. Galley consists of bespoke made to measure storage cupboards with Corian work surface.Brand new Waeco CRX50 12v/240v Compression fridge,Microwave and Gas Oven,Hob & Grill complete the installation. Sovos Flip Down Digital TV and DVD player together with amplified source seeking aerial. USB charging points throughout VHF radio. Hummingbird Pirahnamax…..depth and fishfinder fitted
Disclaimer
The Company normally acts as Broker for the Vendor who unless otherwise stated is not selling in the course of Business. Whilst every care has been taken in the preperation of these particulars, the correctness is not guaranteed and they are intended as a guide only and do not constitute a part of any contract. A prospective buyer is strongly advised to check these particulars and where appropriate at his/her own expense to employ a Qualified Marine Surveyor to carry out a survey and/or have an engine/sea trial conducted, which if conducted by us will not imply any liability on our part. The vessel is offered subject to prior sale, price change or withdrawl without notice. This specification it's content and all photographs are copywright of Naburn Leisure Ltd.
...Read full description
CategoryMotor Boats
SubcategoryClassic Motor Boats
Sales statusunder offer
ManufacturerCustom
ModelGentleman\'s Thames Cruiser built by Richmond Slipways
Mooring CountryUnited Kingdom
CurrencyGBP
Year built1960
Length8.23 m/27 ft
Width2.9 m/10 ft
Conditionnew
SaleTrade
WC & bathrooms1

In our community section
More about this: Watery Reflections: Part 5