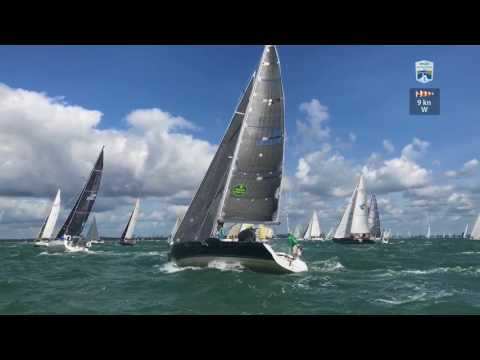 May Contain Nuts is a Simon Rogers designed, water ballasted Whitbread 30 (later Mount Gay 30), from 1996 and a sister ship to the famous Sticky Fingers.


At 9.5 metres overall she is probably the smallest (and cheapest) boat which can be raced offshore up to, and including, the Fastnet Race. She was formerly called Brightwork, and was raced in several shorthanded series and RORC races by the previous owner. We have owned her since 2014 and competed locally and in RORC races including Fastnets in 2015, 2017 and 2019.

She has been continually uprated over the years by ourselves and the previous owner with recent conversions to a deck-mounted reeving bowsprit with a fully asymmetric offwind inventory and a new rig.

She is a fun, solid and safe offshore boat, with sufficient accommodation for the average Spartan, and full standing headroom in the cabin (for Hobbits)

Currently set up for short-handed sailing, if you want to race SORC or RORC 2-handed, she’s competitive against the Sun Fast 3200’s and if you want one but and can’t afford it then this is the boat for you.

The hull is foam cored GRP, the underwater sections were gelshielded at some point in the past but this has become a bit patchy so we have sanded it and applied 2 coats of Interprotect epoxy. It is currently covered with Eelsnot foul release coating

Aluminium mast & boom by Selden, this was installed in 2011 and at the same time carbon chainplates were added on the gunwhale to match. The lower spreaders are full width.

Single line reefing for 2 reefs in the boom

Carbon deck mounted bowsprit, using Selden mounting rings. This has a single tackline running up the centre of the bowsprit and is a thick-walled tube and used without a bobstay to fly asymmetric spinnakers and the code 0.

Rod standing rigging apart from the wire forestay and a dyneema backstay.

Fittings for a fractional spinnaker halyard, which is currently not installed,

The jib sheeting arrangement has recently been changed to a fully floating system using low-friction rings which is much simpler, lighter and cheaper and seems to be working well so far. The original tracks and Harken cars will be supplied with the boat.

Mains
‘For best’ 2014 North offshore carbon laminate main, with a carbon taffeta laminated on one side, and 2 reefs. We use this sail for the summer and for offshore races, it is in very good condition despite a few batterings (especially the 2016 Round Ireland) and still has an excellent shape. This is the one on the boat in the video from the 2017 Fastnet mentioned below.

‘Delivery’ and winter main. 2011 Vectran Sanders main within 3 reefs. Physically in very good condition but starting to get a bit full. Still wins races in our local winter series.

Headsails
No 1
2016 20 sq metre Dimension Polyant carbon GPL furling headsail, set flying on a Profurl Nex 1.5 endless line furler. Made by Goacher Sails. This excellent sail is the one on the boat in the video from the 2017 Fastnet mentioned below.

There is also a Karver KF1 furler which was used on this sail, but it currently has a part of the housing broken off. If the part is available from Karver it would be easy to repair.

No2
2017 20 sq metre Dimension Polyant carbon GPL with a ‘LiteSkin’ non-woven carbon fabric laminated on both sides. This one is hanked on to the forestay and is a beautiful sail, it’s bulletproof and pulls like a train, good for up to 25 knots true. Also made by Goacher sails.

No3
This is the worst sail on the boat. An old hanked on sail converted to a furling sail with vertical battens. This also sets on the Profurl unit but because it was converted the top does not furl up very well.

No4
Quite old, but not much used PBO heavy whether jib. In excellent condition and very flat. Brilliant sail for when it gets very windy. Pretty small and not much use below about 25 knots.

The Idea behind this setup is that every headsail change is either from a furling sail to a hanked one, or vice versa, which makes life a lot easier. The addition of a good No 3 would finish the job.

Jib Top
A hanked on jib top by Bruce Banks. Made in 2007 but very little used. We have found it very useful on deliveries but it spends a lot of time in my attic.

Storm Jib & Trysail
Only been out of their bags for the Fastnet gates.

Mighty White
85 sq metre asymmetric from Steve Goacher in 2019. Delivered 2 weeks before the Fastnet and the main source of our good result this year. Optimised for sailing deep.

Big Blue
95 sq metre masthead asymmetric, in reasonable condition. This is currently not on the certificate as we felt it was not worth the rating hit. Unused for a couple of years. (It’s blue). Sanders sails, 2011.


Code 0
2011 Code 0 from Sanders. This flies from the end of the bowsprit on another Profurl Nex 1.5 and the masthead spinnaker halyard. This sail has not had a huge amount of use before we got the boat. It’s in pretty good condition.

Others
A white asymmetric which is too small for the boat, in reasonable condition. It should really be on eBay, but I haven’t got round to it.

2011 Sanders Carbon No1. A large (130%?) carbon furling headsail, which was originally used on a furlex furler but now has a 9mm dyneema bolt rope so it can be used on the Profurl units. A heavy, bulletproof sail in pretty good condition. Could easiliy be converted back to use on a foil.

Relling Main
Age unknown, semi-reasonable condition. This is fully battened and has a very large roach, in the style of an IMOCA 60 before Fathead mains came in. It is very powerful, and great in light airs, but it kills the IRC rating. Might be good for deliveries.


Electronics
AIS
Comar CSB200 AIS transponder and VHF antenna splitter. This model has no display but interfaces with the PC charting software.

GPS
Garmin GPS128. Very old but solid and easy to use.

Miniplex
Accepts all the instrument, GPS and AIS data and transmits it over WiFi. Various apps for Android or Apple tablets will pick it up allowing you to navigate on deck.

Autopilot
Raymarine SPX-5 with a GP ram which fits onto the tiller. ST6000 control head.

Lighting
Interior and navigation lights are all LED


Safety Gear
Full RORC Category 2 safety gear except for a handheld VHF, ‘means for severing the rigging’ (we take a battery powered angle grinder, which is not included) and lifejackets, as our crew bring their own.

Interior
2 Saloon berths with lee cloths and cushions
2 quarter berths with camping cushions
Galley with sink and a single burner gas cooker, with attached gas bottle. This is a gimble-mounted Jetboil.
Chart table with electronics and chart stowage
Heads in the forepeak.

Other stuff
Shortly after the start of the 2018 St Malo Race we were on starboard and were rammed by a port-tack Class 40, right in the Hurst Narrows. The port pushpit was completely mangled, their spreaders were caught in our backstay, so I had to cut it, and the Jon Buoy was smashed off the back and inflated. Insurance has paid for: