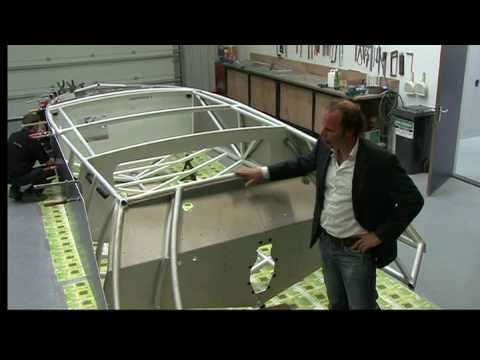 This Silvestris 23 ft ’Sports Cabriolet’ was built by Spyker cars in the Netherlands in 2007. Spyker were a Dutch super car company and they also made 5 Silvestris boats in their marine subsidiary company - Silvestris Aquamotive - and you can see the car influence in her design.


The brand was launched just before the 2008 recession and the company did not survive the crash. They were being marketed for €250,000 at the time.

It is a very cool design based upon an aluminium space frame (that was also used in their cars) and the exterior is also aluminium.

When we acquired her I found these links on YouTube.

She has a Volvo Penta 5.7 litre petrol V8 320 hp with duo-prop stern drive and around 80 hours on the engine (although we are not certain of this but we were told that she has been very little used as she sat in a shed in the Netherlands for most of the past decade). There is a button that can change the exhaust from exiting below the water to exiting on the rear deck massively increasing the noise, and it sounds wicked.

The fuel tank is 180 litres and she cruises at 30 knots comfortably and has a top speed of 48 knots.

The interior is marine grade leather and she seats four comfortably with a jump seat between the two rear seats for a fifth person. The boat can be secured with a remote control that closes the two hatches over the seats. This can be done independently so the rear hatch can remain closed whilst the boat is being driven, providing a sun deck behind the front seats.

She has an enormous carpet lined storage locker in the bow that is accessed via the 'bonnet' so there is plenty of storage. There is also a heater in the cockpit that recycles warm air from the engine to warm your toes!

When we acquired the boat, I found the original builders and they advised on the refurbishment and service that was carried out in the Netherlands before we brought her across to the UK.

She is one of only five boats built by Silvestris before their demise in the late 2000's crash. The other four boats still live in the Netherlands and are owned by Dutch families, having apparently not changed hands since they were first purchased.

A chance to buy an uber stylish, one off, sports cruiser with very low hours and plenty of wow factor!

In our community section
More about this: Saxdor 200 Sport
Display map