A plus 50m Southern Ocean fishing boat has finally been captured by Navy authorities after managing to evade prosecution for months. The boat has been using illegal methods to catch Antarctic Cod with fishing nets that could stretch the distance of Westminster to Watford.

Officially known as STS-50, the boat had been constantly sailing under false names such as Aida and Sea Breeze, whilst also using multiple national flags to throw authorities off guard.The STS-50 had already been caught once by Chinese officials, but somehow managed to escape and has been on the run ever since.

The crew have been using a method called gillnet fishing to trap Antarctic Toothfish. It’s reported that the crew had over 600 nets on board, that were designed to expand and reach a staggering distance of 18 miles - a similar distance that would get you from central London in Westminster, all the way to Watford. 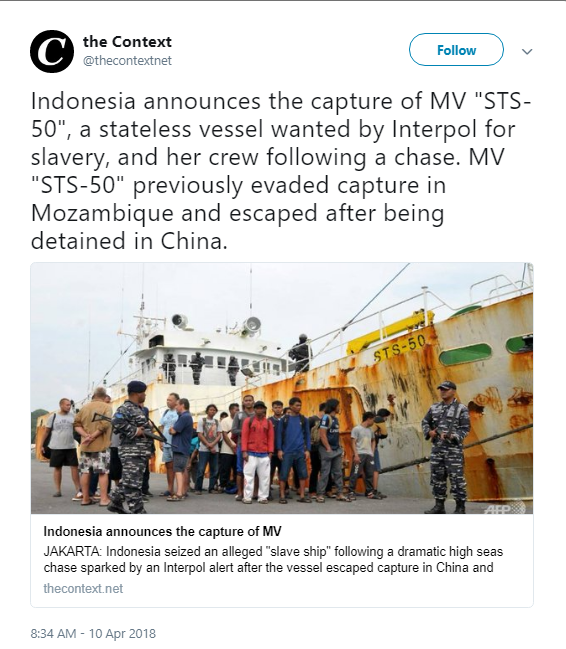 There are many specific laws that restrict how you can operate within the Southern Antarctic region of the world, and gillnet fishing, in particular, has been banned for over 10 years, as it’s been constantly described as a massive threat to all types of marine life. These nets have not only been proven to kill and injure the creatures underwater but birds at the surface to such as Albatross; an already endangered species.

Supposedly, the ship is not owned by a particular nation which makes prosecution a little harder to deal with, and the fact that the crew have no access to documentation and don’t appear to have been paid, suggests that these workers could be part of a more serious trafficking scandal.

No further updates have been issued as of yet, but you can read the full story on the Independent website here.